Before you get too excited, child themes aren’t yet in the theme directory. That’s what this post is aimed at achieving though.

For those unfamiliar with child themes, just take a look at this explanation of why and how to use them.

Back in April, Justin Tadlock wrote a similar post that proposed several changes to the directory. Joseph Scott took some time to reply and address some of the issues facing his proposed upgrades.

Child themes pose an interesting challenge. In part because they can, at their own option, replace portions of the parent theme which makes automated testing harder. But perhaps the most difficult part to that puzzle is providing an easy experience for end users when they want to use a child theme. A number of people find it challenging to install a regular theme, adding another layer of issues for them to be aware of isn’t likely to help.

I’d like to expound on the problems and propose some specific solutions.

Perhaps it checks for the existence of certain templates, but in the case of a child theme the automated checker could ignore that rule.

So, with a couple of minor tweaks (checking if the style sheet signifies a parent theme and possibly ignoring the existence of certain templates) I think the automated testing could easily be achieved.

After a theme makes it through the automated process it moves onto manual approval. This process wouldn’t be any different than the existing process. In fact, child themes would probably present fewer problems than standard themes because they would likely adhere to most of the templates established by their parent.

Indeed, this is a hard part. Especially since another point Joesph made was that lots of users still have a hard enough time understanding how to use themes in general. So let’s keep that in mind while I present some options to integrate child themes into the directory.

We’ll start with the parent theme and we’ll use Hybrid as an example. Essentially, we need to make Hybrid the primary theme and avoid the child themes dominating any of the UI. Since the theme pages already use tabs I figured we could add a “Child Themes” tab if any child themes exist. 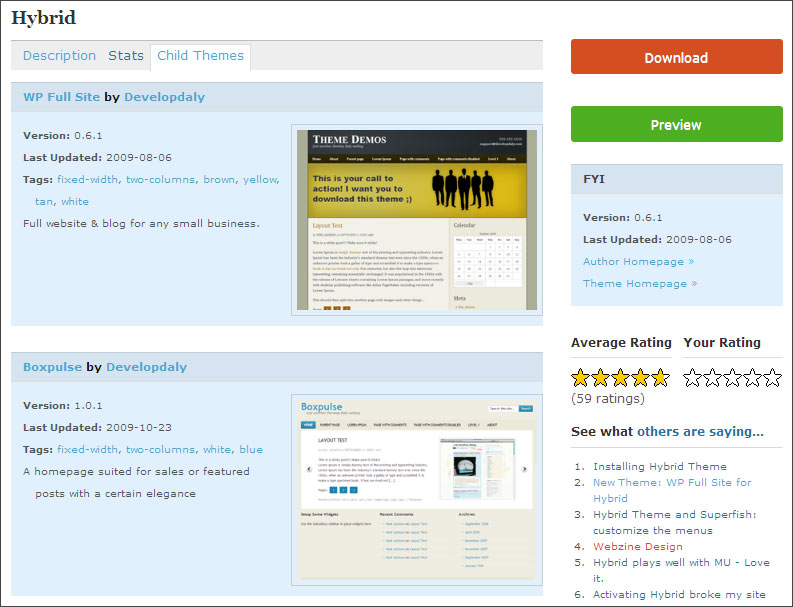 Clicking on the theme title or the screen shot would take you to the child theme’s unique page. 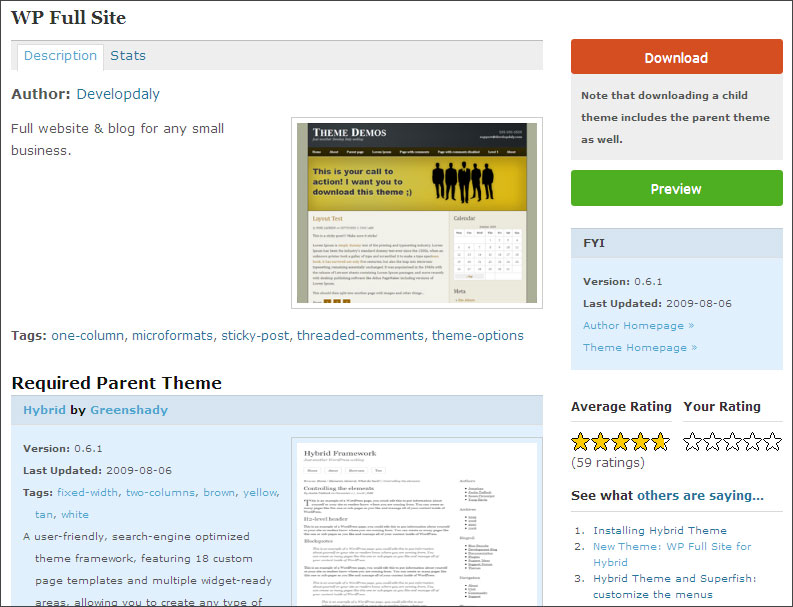 Of course a reference to the parent theme is necessary so a simple information box should suffice.

This is where the user experience complications begin.

Notice the “Download” button has a note that the parent theme will be included in the download. This prevents anyone from downloading a child theme, uploading it and being confused as it why it doesn’t work. There’s one foreseeable dilemma here. If someone downloads a child theme, uploads the child and the contained parent theme and unknowingly overwrites an older version of the parent theme there may be compatibility issues. I don’t see any way around this, but I wouldn’t say its a deal breaker. More on this in the next section…

Installing from within WordPress presents another issue. The installer would need to check if the parent theme exists. That should be easy enough. If the theme exists then skip installing it, however, what do we do if an older version exists? Do you prompt the user with an option to upgrade the parent?

I’m actually stumped on this one. I could really use some ideas here.

The inclusion of child themes in the official WordPress Themes directory is good idea because it gives themes greater flexibility and makes theme management easier for users. There’s a few problems to overcome before allowing child theme submissions into the directory, but nothing a little more brainstorming can’t resolve. I think with enough support from the community we could get this implemented rather quickly (who can even know what that means though?).

Update: Vote for this idea on WordPress.org

31 replies on “Child Theme Inclusion in the WordPress Directory”

Great writeup. To me, the things in the article aren’t the biggest obstacles. The biggest is to just get someone working on the project, making decisions, and moving everything forward. This post presents a step in the right direction.

I have to agree with Justin. Someone has to take care of this… But since wordpress.org should be community driven (or at least that’s the theory 🙂 — check wptavern’s latest post about this) — we should be able to do something about this.

I have 5 Child Themes released for Thematic and I would really make my day if they were included in the repository!

So with this in mind I’ve created this idea in the wordpress.org Ideas category:

So let’s twitt and blog about it!

I’ve voted in the ideas forum as well. Hope someone at Automattic is listening 🙂

Smart proposal. I expect it’s only a matter of time before we see something very similar to this happening.

I agree that child themes should be included in the directory. Some of the best coded themes available are parent/child themes.

It should be easy enough for the brainiacs at Automattic to figure a way of checking existing version installed and prompting the end user to upgrade both if needed.

A quick compatibility check like they have when installing plugins that warn you if the plugin isn’t compatible with your current WP version. That script could be converted to check parent/child themes compatibility.

Make some noise I would love to see this added.

Yes, it’s really good idea. Child themes should be included in the directory.

I maybe common and a simple, but is the child theme for selling cars. When make the header of action child cars. Expression go a long way. Whiteblonde @twitter.

Linda, I can’t say I understand a word of what you said. Something got lost in translation 😉

In a trac ticket about wp.org 2 months ago Jane Wells replies:

We’re just beginning an assessment of the .org site with the intention of redesigning to make it a more useful resource, including making access to themes and plugins much more prevalent and friendly. Will be setting up ways for community to submit suggestions and feedback once we’ve put together a short proposal on a re-org of the site.

Theres also some dicussion on child themes in this ticket:
http://core.trac.wordpress.org/ticket/10596

Maybe its time for a child theme ticket for WP.org ?

John, thanks for the extra information. Let’s hope those tickets start getting some real attention.

An interesting topic for discussion, but something I did not read in this discussion is the testing for the parent theme’s existence / availability.

In its simplest terms, IMHO, a child theme simply imports another themes “templates” and carries forward. Therefore, any theme could be a “parent” not just the more well known “frameworks” such as Hybrid, Thesis, etc.

Now, for instance, what happens if a “parent” theme is suspended? Whose responsibility will it be to address all the child themes in the theme repository associated with it?

You’re right, testing for the existence of the declared parent theme would be required. If one doesn’t exist then the child theme can’t be approved.

Good to see some ideas on what this process might look like. Aside from the WordPress.org theme directory side of things there are some issues for WordPress itself to improve (as you’ve pointed out) as well.

The grandchild discussion has been had in plenty already in fact. There’s certainly some validity to using a grandchild theme, but WP doesn’t need to officially support them in the repository.

Child themes were a great new feature of 2.7, and several versions later there’s not a whole lot being done with them. I say give child themes their chance and don’t even think about the grandchild theme “problem”.

I wonder if the WordPress core should be revamped. The idea of having to edit a theme is a troublesome one to begin with. We’re taught to never touch the source, but WordPress, without the concept of a Child Theme, forces it. Further, without carefully written themes and widgets like Hybrid Hook, folks are forced to learn PHP and edit themes all the time.

Wouldn’t an alternative solution be to redo the WordPress core to present the Header, Body, Loop, Sidebars, Footer, etc. with hooks already in them? Then allow a place, like the wonderful plugin mycss and a unique function template for people to write their own code.

Theme builders would actually write conglomerations of widgets with a default css template which the user would affect with their own unique codes. The widgets themselves could either replace WordPress core modules (like the terrible menu) or act as add-ons.

That’s really where Justin Tadlock and others are going with child themes. Maybe it would be more efficient if the WordPress core presented it.

The benefits to worrying about updates would then begin to go away as well.

[…] has been some discussion recently on child theme inclusion in the official theme repository. Child themes are WordPress themes that latch onto a parent theme to do something a little extra, […]

[…] a better visual on how some think it should work, check out this post or read some more thoughts about it […]

[…] A case for including child themes in the official WordPress theme directory http://developdaly.com/wordpress/child-theme-inclusion-in-the-wordpress-directory/ […]

[…] an article that was written about the topic at the end of October: http://developdaly.com/wordpress/chi…ess-directory/ I guess the real problem is just getting someone with power to support the idea and get the job […]

[…] prediction is that before long the majority of new themes will be child themes. That is, once the WordPress theme repository supports child themes I think they will catch on quickly with developers and gradually gain users. The reason is simple. […]

I am willing to work for restructuring the theme repository of wordpress this year in GSOC, i really like your idea and am willing to implement it with some modifications.I’ll be really grateful if you could provide me with some more suggestions..:)

Man, if I had some I’d give them to you. What else are you looking for though?

Did you check my proposal..
its at http://gsocdk.wordpress.com/
let me know what you think of it.:)

Yeah, I checked it out and I think its awesome. I don’t know any other ideas besides the ones I’ve written here though. I’m also going to do what I can to promote your proposal.

Thanks for appreciating and for promoting the idea as well. And please let me know if something else strikes…

[…] child theme inclusion in the WordPress.org directory will be a reality for theme developers very soon, this is definitely a big step in the right […]

Inclusion of the child theme in the WP repository would be of lot of help to the users..

Any update on the progress here? Child themes in the Template directory would be a great idea, especially with the release of Twentyten as the stock theme.