The Sr. Web Designer role will be a front-end and PHP developer heavy, WordPress experience necessary kind of job where you’ll work directly with WordPress VIP (http://vip.wordpress.com/) to build sites for our brands (Chrysler Capital, Maserati Capital, RoadLoans, Santander Consumer USA, and more) in addition to building our core websites where customers can pay their bills and dealers can view loan applications. http://www.santandercareers.com/job/sr-web-designer/

Both positions are open to officing out of our Denton, TX Square location or our Downtown Dallas, TX location — both of which have plenty to offer in the way of restaurants, transportation, coffee shops, etc.

So if you know someone into design or web development, share this with them!

One year ago I bought a Nest thermostat. Out of the need to justify the $250 cost to my wife, I analyzed one year with and one year without the Nest. Below are my findings.

How to read this graphic: 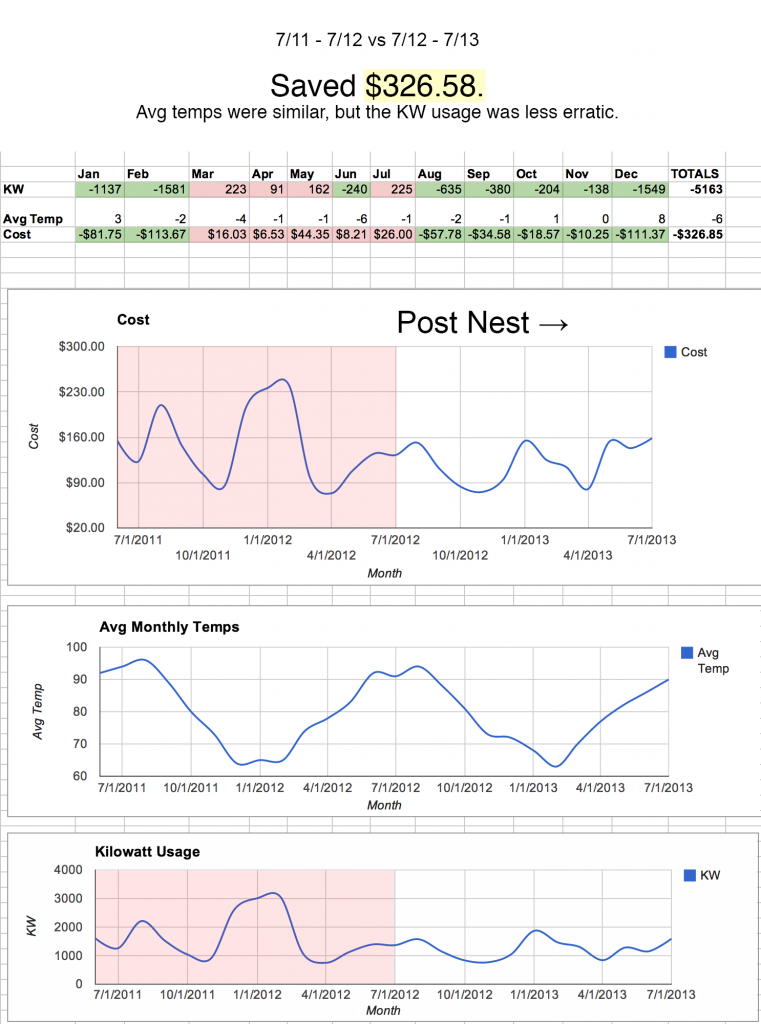 I just wanted to share real quickly (because I’m pretty stoked) that after months (really, years) of development I finally have what I consider a professional workflow for WordPress development.

Below is a graphical representation of what takes place. But it breaks down to this (with Git, but can easily be accomplished with SVN as well):

You can fork the Denton Bible Church Website even if you just want to use this is a framework for your project.This is built off of Hybrid Enterprise which is a cleaner repository that accomplishes the same thing.

Finally, and sadly, I am still looking for the best multi-environment database solution. Ideally, a fourth environment would be used to make content changes against the latest production branch code and then changes would be selectively deployed to the production database. WordPress 3.6 almost had a great solution.

A group of developers, designers, & Denton enthusiasts got together less than a month ago to discuss the problem of local voter turnout, lack of education, and lack of accessibility to that education. I’m a prime example. I’ve never voted in local elections and never paid much attention to it despite having a friend that is super involved in local politics for his district. Set aside our ambitions to help solve this problem, because the most exciting thing for me is that a group of Dentonites loosely tied together by friends of friends got together and turned around a project in a short amount of time. 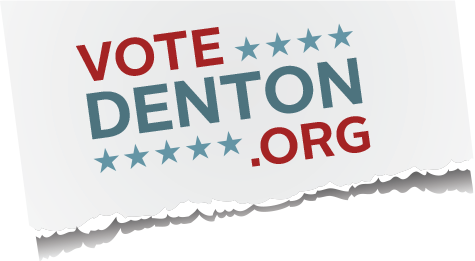 Vote Denton has a simple goal: make voting easier in Denton, TX. For now, you can get some basic information about local elections in addition to finding out what district you are located within. From there, you can go to the county’s website to find ouf if you’re actually registered to vote and registered in the right district — a feature we plan on rolling into Vote Denton soon.

I’ve had my hand in Vote Denton, Create Denton, Hear Denton (now defunct), and I see all sorts of “{Verb} Denton” sites out there. I brought a lot of them together under one roof as a sort of starting point to get connected and to Verb Denton. 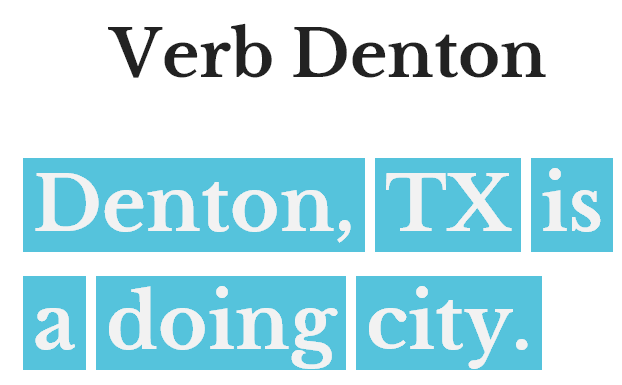 Both of these projects and be found on Github, are publicly accessibly and anyone can contribute. Openness & collaboration makes these services better.

WordPress is somewhat notorious for using absolute URLs in its linking to images and other posts within content. Many have argued for both sides.

It’s quite simple for me: relative URLs are easier for development, absolute URLs are smarter for live websites.

There’s a compromise to be had.

WordPress should add these shortcodes to core:

This enables the user and the WordPress editor to insert links to other pages and media on the site while maintaining its given site domain and path. Developers would no longer have to find and replace all instances of the home URL when importing a local database to another environment.

When linking to another page on the site, WordPress could insert [home_url]?p=203, maintaining a lifetime of environment changes and domain moves without broken URLs.

Or, when linking to an image: [uploads_directory_url]/2013/01/example.jpg. Actually, I think linking to media needs to be completely rethought (i.e. [media id="100"] would render whatever image path was associated with that media ID. This would allow you to update an image in the media library and have the image update everywhere it exists on your site).

Update: I wrote a proof of concept plugin for media being inserted into posts with shortcodes to ensure portability.

This is a humbling experience.

I was inspired to compile these because of @justintadlock‘s tweet.

I went back to oswd.org, the birthplace of my HTML debut. I built all my websites from 2002ish to 2006 in Flash (which sounds like a REALLY long time now). My introduction to HTML and CSS coincided with open source web design very nicely. Unfortunate for the Internet, though, I released seven simple HTML/CSS designs in 2006. Soon thereafter I found WordPress.

When you enqueue CSS or JS files WordPress will append the current WordPress version as a parameter … an attempt at cache busting.

The process by which sites or servers serve content or HTML in such a manner as to minimize or prevent browsers or proxies from serving content from their cache. This forces the user or proxy to fetch a fresh copy for each request. Among other reasons, cache busting is used to provide a more accurate count of the number of requests from users.
– IAB

This type of parameter on your static resources is semi-useful. When you upgrade your version of WordPress returning visitors will be served with a fresh copy of your files. But what about all those changes you made to your style.css in between WordPress upgrades?

I use Beanstalk as my SVN repository host. Their coolest feature is automated and manual deployments. Simply commit your changes locally and watch them deploy to your staging/production server within seconds. No FTPing (and no accidents). Beanstalk puts a single file in the root directory of wherever you’re deploying to called .revision. It contains a single integer which is the latest revision that was deployed. You could manually update a file like this if you don’t use deployments.

I needed a way in my multisite setup to have multiple environments that shared the same database, but used different domains.

When you add multisite to the mix it breaks.

The problem is that the wp_blogs table defines the domains too, so I needed a way to define them in the config file.

Taking @chrisguitarguy‘s advice, I used sunrise.php to intercept the host and spoof it so that WordPress uses domain I customize to load the site content.

Below is a graphical representation of what I’m proposing as a new development process/environment for my larger WordPress sites. I want your feedback.

This doesn’t include all the details. For instance, WordPress configuration files have to be customized for each server, database usernames should be specific to each environment, etc. But should this flow work?

Three months ago I started using a Macbook Pro for work. I really love a lot of things about the hardware and the software, but being a Windows user in my previous life there have been a few things to get used to and some things I think are just really dumb.

Ironically, my biggest frustration began when I was actually trying to make backups of a ton of work I had completed over a three week period. Too bad OS X failed me at this point…

In Windows and most Linux distributions, copying a folder onto another folder results in a prompt to merge the contents of the folder, subsequently asking if you want to overwrite/replace existing files. That’s exactly what I wanted and expected. To my surprise, OS X replaces … i.e. DELETES everything in the folder being pasted to. Those files aren’t sent to the trash. There is no undo. They’re gone. End of story. Pissed.

Side note: maybe someone out there has a workaround for this (other than Terminal) If you’ve got a local WordPress installation that has versioned (SVN or Git) files then you can’t use the WordPress automatic upgrade. But it’s worse than that. You can’t just download a plugin and paste the new directory on top of the old plugin because you wipe out all the .svn directories, breaking everything.

I’m fortunate to have a nice Apple Cinema display with a Thunderbolt connector to simply dock my laptop. You’d think that having a pure Apple setup (laptop, display, connector, keyboard, mouse), everything native and setup as Apple would like you to have that everything would work seamlessly.

Instead, a third of the time I plug my laptop in and my mouse and keyboard don’t work and the only way to operate the setup is from the laptop itself. The only fix is to restart.

Headphones should be simple

This one baffles me because of how simple it should be. When I plug my headphones into the laptop and music is already playing through my monitor sometimes it doesn’t transfer to the headphones. Sometimes it does — no rhyme or reason. Unplug, plug, unplug, plug.

Windows may not be as simple for people to use, but so far my experience is that OS X has more flaws. That surprises me, because the hardware and software are so controlled. Windows has the vulnerability of hundreds of OEMs, hardware stacks, many more third-party applications, drivers, and more. Despite all that, I have a less buggy and more expected experience on Windows.

The jury is still out though. I’m more easily frustrated because it’s new; the flaws are new to me. There may be just as many or more problems with Windows that I’ve just become accustomed to. After a few months I may follow up with a more experienced opinion.