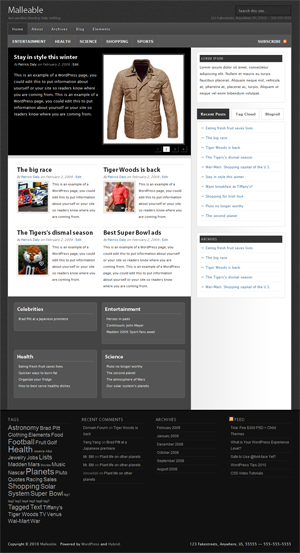 Malleable is based upon an older theme I once released, but has been updated and simplified as a Hybrid child theme.

Malleable is a news-type theme that features a configurable slider and address (with microformats). It is based upon the Hybrid News theme so it shares many similarities. 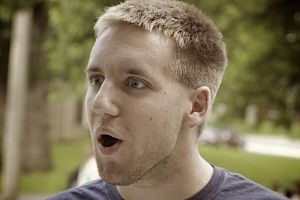 I generally spend most of my time consulting and designing custom sites, but not everyone needs that service. For the rest, a decent design conversion fits the bill.

There’s plenty of PSD to WP conversion companies out there, but none that tailor to child themes, specifically. So I’m giving this a test run.

The first five requests I get will be $300. Send the tweets out and let your friends know about this deal because it won’t last long.

In addition, I’ll be turning the designs around in one day each. Meaning, you’re likely to get your site the next day and, at most, five days later.

Just visit the Contact page and I’ll get back to you ASAP.

Before you get too excited, child themes aren’t yet in the theme directory. That’s what this post is aimed at achieving though.

For those unfamiliar with child themes, just take a look at this explanation of why and how to use them.

Back in April, Justin Tadlock wrote a similar post that proposed several changes to the directory. Joseph Scott took some time to reply and address some of the issues facing his proposed upgrades.

Child themes pose an interesting challenge. In part because they can, at their own option, replace portions of the parent theme which makes automated testing harder. But perhaps the most difficult part to that puzzle is providing an easy experience for end users when they want to use a child theme. A number of people find it challenging to install a regular theme, adding another layer of issues for them to be aware of isn’t likely to help.

I’d like to expound on the problems and propose some specific solutions.

Perhaps it checks for the existence of certain templates, but in the case of a child theme the automated checker could ignore that rule.

So, with a couple of minor tweaks (checking if the style sheet signifies a parent theme and possibly ignoring the existence of certain templates) I think the automated testing could easily be achieved.

After a theme makes it through the automated process it moves onto manual approval. This process wouldn’t be any different than the existing process. In fact, child themes would probably present fewer problems than standard themes because they would likely adhere to most of the templates established by their parent.

Indeed, this is a hard part. Especially since another point Joesph made was that lots of users still have a hard enough time understanding how to use themes in general. So let’s keep that in mind while I present some options to integrate child themes into the directory.

We’ll start with the parent theme and we’ll use Hybrid as an example. Essentially, we need to make Hybrid the primary theme and avoid the child themes dominating any of the UI. Since the theme pages already use tabs I figured we could add a “Child Themes” tab if any child themes exist.

Clicking on the theme title or the screen shot would take you to the child theme’s unique page.

Of course a reference to the parent theme is necessary so a simple information box should suffice.

This is where the user experience complications begin.

Notice the “Download” button has a note that the parent theme will be included in the download. This prevents anyone from downloading a child theme, uploading it and being confused as it why it doesn’t work. There’s one foreseeable dilemma here. If someone downloads a child theme, uploads the child and the contained parent theme and unknowingly overwrites an older version of the parent theme there may be compatibility issues. I don’t see any way around this, but I wouldn’t say its a deal breaker. More on this in the next section…

Installing from within WordPress presents another issue. The installer would need to check if the parent theme exists. That should be easy enough. If the theme exists then skip installing it, however, what do we do if an older version exists? Do you prompt the user with an option to upgrade the parent?

I’m actually stumped on this one. I could really use some ideas here.

The inclusion of child themes in the official WordPress Themes directory is good idea because it gives themes greater flexibility and makes theme management easier for users. There’s a few problems to overcome before allowing child theme submissions into the directory, but nothing a little more brainstorming can’t resolve. I think with enough support from the community we could get this implemented rather quickly (who can even know what that means though?).

Update: Vote for this idea on WordPress.org 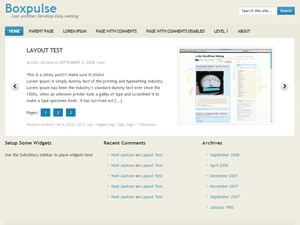 Another day, another theme. Whew…I’m worn out now, but I’ll give you the details before I take a break.

This theme includes a template for using a full-width slider, a feature often asked for by the Hybrid community. Check out all the details and demo the theme at the Boxpulse page. 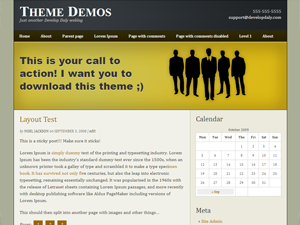 Just earlier today I wrote that I’d be releasing a new version of WP Full site. I got pretty excited afterward and got to work.

Go on, check out the new WP Full Site, which is now a child theme of Hybrid.

With the recent redesign of the site I made it clear that the Hybrid theme has been wonderful to me. Since I began using it I’ve built all client sites upon it and plan on doing that from here on out. Theme frameworks in general are the best thing for WordPress since I’ve been around.

Its also given me the motivation to get back into theme development. Building child themes (why child themes are so great) is a bit different than the usual process. You normally have to build templates for every page and take into consideration lots of things pertaining to standards, SEO, plugin compatibility and the such. With child themes, the process is a lot heavier on the design and usability and much less on the development. This is certainly helpful in creating beautiful themes.

While this theme has been good to a number of people I’m not particularly pleased with it. Its purpose is fitting for lots of uses though, so I’m not getting rid of it completely. However, soon I’ll be discontinuing the 1.x branch and releasing version 2 which will be a child theme of Hybrid.

Why is this a good idea?

This will be the case for all new themes, not just WP Full Site.

In general, I’m bringing back some life to this site. Its become quite stale. I’ll be making some effort to post more, post better content, and offer more and more to the WordPress community.

I’ve got projects spread out all over the place, some you’ve never heard of simply because I didn’t do a great job of making them available.

Roping everything back into this site will greatly benefit everyone. For me, I’ll be able to more closely tend to everything. For you, access to all things ‘Develop Daly’ will be a click away.

Because of the lack of consolidation, its been easy to neglect things I wish I would have and could have supported better. So, I’m in the process of setting up a forum where I’ll provide support for each of my themes.

I Need Your Help

Honestly, I need a kick in the butt sometimes. To a fault, I’m motivated by the needs of others and when I feel unnecessary I lose interest. I really love…love being part of the WordPress community and offering my help where I can. So keep me going by asking for help when you need it, letting me know you enjoy my work, and even critiquing it. I’d love to improve where I can, so let me know where I can!

For You Paying Clients…

Everything above is mostly aimed at the community. However, I’m working on a better process of doing client work as well. Hopefully, I’ll have a private client section soon. The goals of this new area will be to manage projects, view progress, and provide premium support.

This is in an early stage at this point. I’m still trying to figure out how all these pieces should work together and what’s even necessary. Any feedback on this would be appreciated!

All of these goals won’t be possible without community! So, bring it on, invite your friends and help me kick-start the re-birth of Develop Daly!